For we are not yet one, and far from free

Incarceration Nation lifts the wool from Australia’s eyes. It provides the answers to the questions we often fall short of explaining, and most importantly it enables First Nations people and their voices to share first hand their experiences. It does so without the colonisers reinterpretation that serves to protect the integrity of Australia’s national identity.

A sigh of relief came when Incarceration Nation aired, it felt as if a small weight was lifted by having a resource that provides the evidence to be able to answer the questions that can be difficult to navigate. The questions we as Indigenous people get asked sometimes leave us feeling helpless when we struggle to explain why we die younger, experience lower employment and education outcomes, or why we experience incomprehensibly higher rates of incarceration. These conversations become a minefield especially with people whose perceptions have already been singularly shaped by discriminatory government policy and the media’s moral panics that further oppress us.

This documentary is unlike anything I have seen before. Whilst I have watched it more than three times, I am unable to sit through its entirety without fighting tears or at the very least getting a lump in my throat. A realisation of the reality that is faced by members of my family. First Nations people. Human beings. We have been discriminated against, fluctuating between the extremes of being scrutinised unfairly or being ignored altogether for over 230 years.

Incarceration Nation is an emotional rollercoaster for me, and an extremely informative and transformative resource for activism in policy, the justice system and education that is based on the principle of Truth-Telling. Whether you are interested in Indigenous issues or not, there is no justifiable denial of the injustices faced by First Nations people when compared with their fellow non-Indigenous citizens.

There is a reason why Indigenous people are thirteen times more likely to be incarcerated than non-Indigenous people despite only accounting for 3.3% of the general population. Joshua Creamer, a barrister-at-law explains in black

and white,  the 1939 Aboriginals Preservation and Protection Act in Queensland discriminated against and criminalised the actions of Indigenous people. The limiting of Indigenous movement and their education and employment opportunities meant that they became visible targets for police, and as a result Creamer explains that:

“We start to see in the seventies and eighties the numbers of Indigenous incarceration just going up, and up, and up. And it’s growing exponentially now – it’s just continuing to grow. But, when you actually go back and you look at history and you understand the legislation you see the root causes of it right? If they were actually able to access a good education, if they were actually able to keep their wages, and let’s say they bought a house in Brisbane seventy or eighty years ago. You know, they wouldn’t be where they are now.”

Incarceration Nation shines a critical light on the lack of accountability from Australian governments and their role in continuing the oppressive systems that have been imposed upon Indigenous communities since 1788. If you think this no longer occurs, then you only need to look at the recent COVID-19 pandemic and the failing distribution of vaccines to vulnerable Indigenous communities to understand that discrimination is as active today for Indigenous communities as it has always been.

In ongoing attempts to validate a deteriorating narrative of victorious explorers who brought enlightenment and civilisation to this continent without opposition, Western knowledge systems continue to work in ways that discredit, disrespect, and alienate Indigenous people and their knowledges. One only needs to look at the works of Bruce Pascoe, Martin Nakata, Stan Grant, Bronwyn Carlson, Marcia Langton, and Aileen Moreton-Robinson, just to name a few who challenge and call out the Western colonising epistemologies that continue to control the way in which society perceives First Nations people. Whilst many of us, Indigenous and non-Indigenous people, have benefited from the society we live in today, we have failed in addressing the gaps that exist between Indigenous and non-Indigenous people.

We as a nation have failed to ask why these gaps exist, who is responsible and who will be held accountable for this? Incarceration Nation makes the answer to this quite simple; institutional racism within governments, policy making processes, and policing. It has unfortunately been left to Indigenous academics, professionals and activists to force their way into the prestigious circles of political organisations and academia to ensure that these injustices are acknowledged and addressed without being simply swept under the rug.

If issues of Indigenous over-incarceration, over-policing, deaths in custody and youth incarceration were adequately addressed, we wouldn’t be seeing the figures that we see repeated in the many reports that come as a result of the pleading by communities for change. The failure to implement the recommendations of the 1991 Report by the Royal Commission into Aboriginal Deaths in Custody is a significant reason we continue to see too many deaths in custody. We must be conscious of the fact that commissions do not equate to action, they simply research and report on an issue and make recommendations. 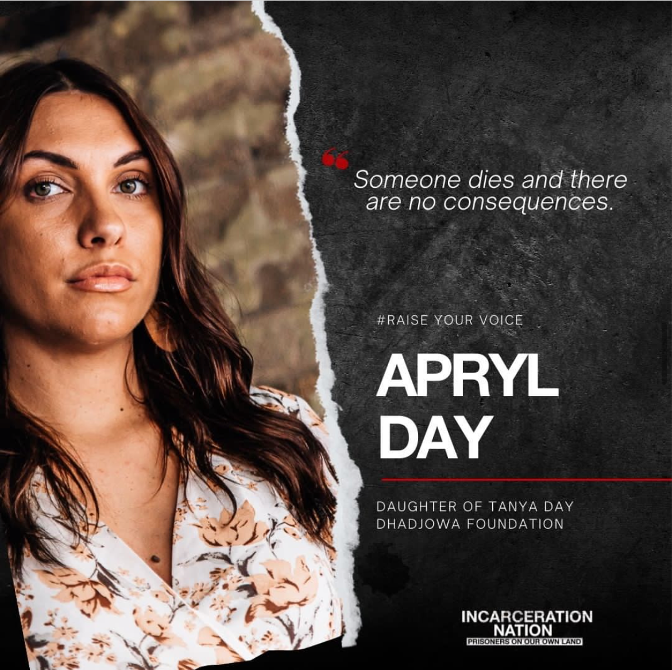 These overwhelming high figures within reports are also a part of the problem. An abundance of numbers thrown around in reports with little understanding of what they represent other than a statistic in a visual graph – are all too easy to ignore. Each number represents a human being, a brother, a cousin, a mother. One of them is Tanya Day, another is Frank Coleman. The dehumanising nature of the data in reports fails to acknowledge each number as a human being with their own personal experiences of being incarcerated, having family die in custody or the effect of these numbers on a wider community.

The relationship that we share with our country and our unanticipated ability to continually adapt, succeed and survive in a society that has historically denied our identity and culture continues to challenge Western understandings of possession and racial superiority. Where there is active resistance to the structures and mechanisms that continue to silence our voices and opinions on the issues that affect us as First Nations people, it is ultimately the process of Truth-Telling that will undo the tightly bound fabrication of Australia’s past. As Teela Reid explains: “this is not about reconciliation.. this is about a reckoning with the truth of our past,” and Incarceration Nation is the perfect example of encouraging Australians to actively question the integrity of the justice system that is meant to protect us when it presents clear evidence of its hypocrisy.

As the reality of Indigenous incarceration is laid bare, an opportunity for support and activism around combating institutional racism and pushing for constitutional reform  emerges. The Uluru Statement From The Heart provides an opportunity for this – a First Nations Voice enshrined in the Constitution to ensure the self-determination and empowerment of generations to come. A process of Truth-Telling from both government and Indigenous communities is crucial to rebuilding a relationship that is receptive and embodies the meaning of Makarrata – coming together after a struggle.

Chelsie is a Noongar woman who works with ANTaR as a Programs and Research Officer where she is helping co-ordinate the Sea of Hands Program. Chelsie is also completing a Bachelor of Social Science, majoring in Indigenous studies at Macquarie University. She is particularly interested in the ongoing impact of colonisation on Indigenous communities and the process of truth-telling in redressing this impact.

Join us and stay informed!

Help ANTaR to continue to campaign for the rights of Aboriginal and Torres Strait Islander peoples by making a donation.